April 2019. Photo: AFP / Riccardo Pareggiani / NurPhoto
EU and China sign a Mandate of Trade Heaven
Beijing promises an investment deal by next year, to curb industrial subsidies and the need for tech transfers, while the EU promises its own transport network
,ByPEPE ESCOBAR,Asiatimes 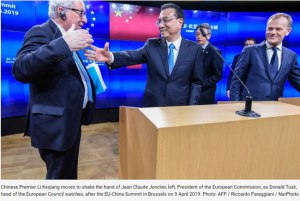 Sparks did fly in Brussels, but in the end the European Union and China managed to come up with an important joint statement at their summit this week, signed by Chinese Premier Li Keqiang, European Commission President Jean-Claude Juncker and head of the European Council, Donald Tusk.

In theory, there’s agreement on three quite sensitive fronts: a complex, wide-ranging EU-China investment deal to be signed “by the end of next year, or earlier”, according to Li; Beijing to increasingly commit to erasing industrial subsidies and the obligation of technological transfers; and a substantial opening-up of the Chinese market to EU companies.

The EU is the largest combined market in the world and China’s top partner in trade, while China is the EU’s second largest trading partner. So, the EU-China summit on Tuesday was the real deal, unlike the endless Brexit soap opera.